Christmas on Culebra is a lit up event around the barrios - so we took a driveabout to see!

This Santa sang and swayed his way into my laughing heart.
I'd have taken more video but he was getting visitors, it seemed rude.
I had the idea originally to brighten up the season by stringing up lights and making Christmas festive, but in the end, that didn't happen. I'm so glad that plenty of people decided otherwise! 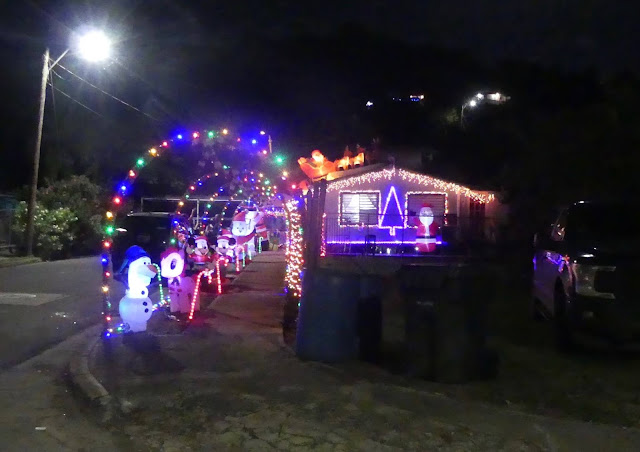 First, to see in real life what I'd seen on social media, kids included.
It was impressive! 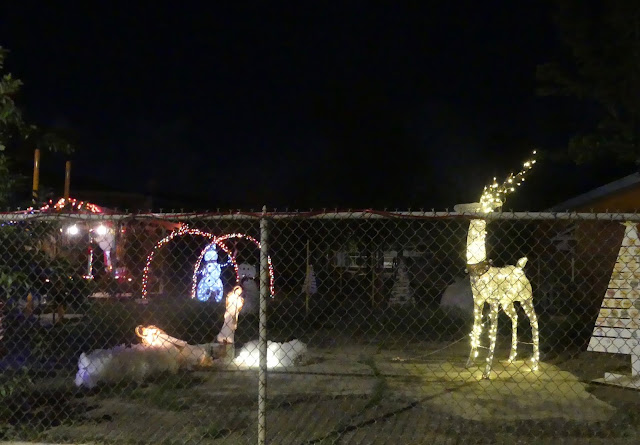 A little winter wonderland at 78 degrees. 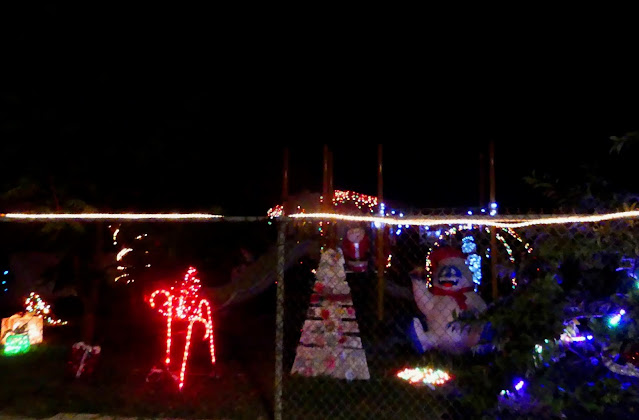 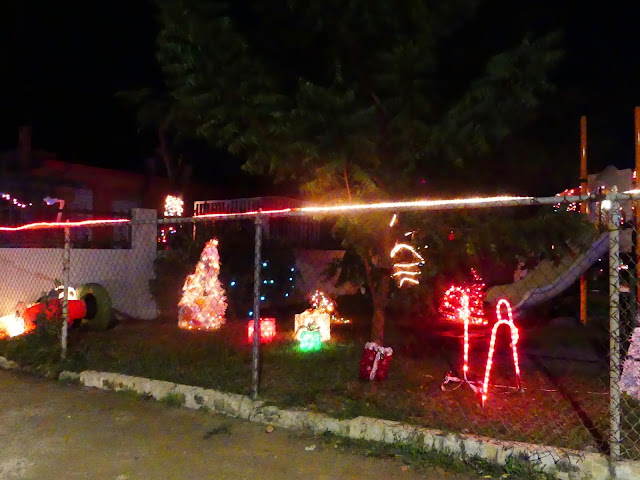 While the date of Christmas was past, holiday brightness was (and is) still shining 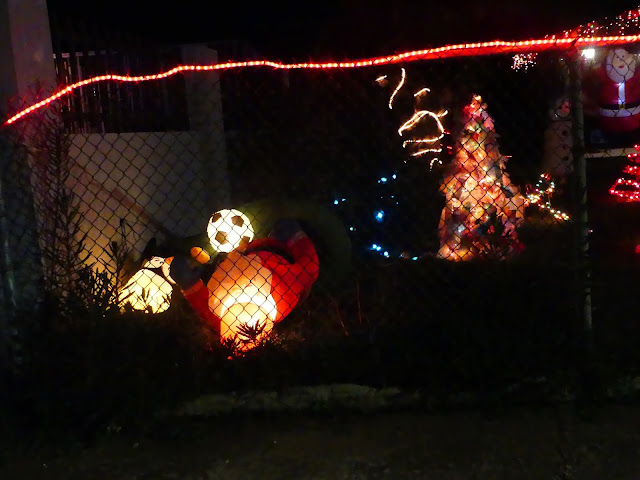 I don't know what happened to poor Santa here, unless a long game of
soccer just tired him out completely. Or an unlucky kick, but I'll go with tired. 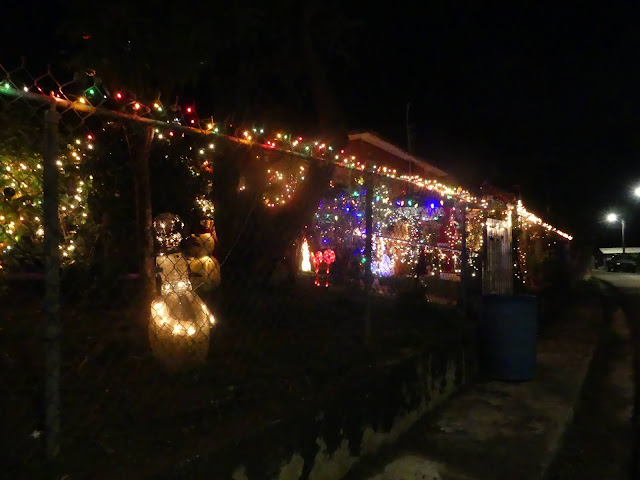 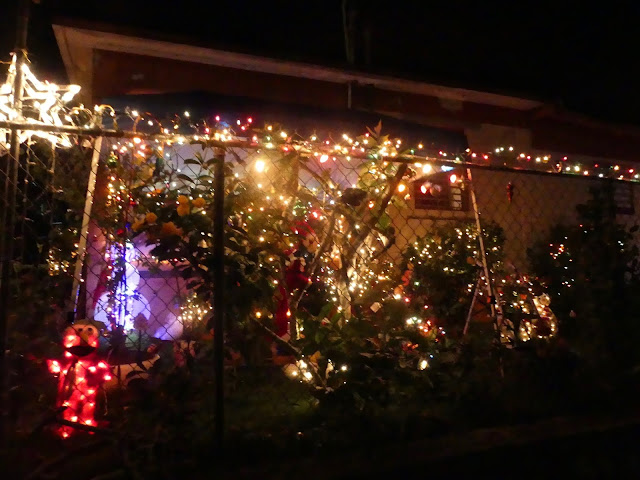 There was more, but we ended our drive-by light show here.
When I was a little girl (and if you've heard this story before, just skip down a bit) we lived for a brief time in New Mexico, at first out in the country before moving to the town/city of Albuquerque (holy crap! I spelled it right the first time!). Out in the country, living in an adobe house, the sky was the light show. That Christmas, my Dad loaded the four of us in the car and took us on a drive. There, in the middle of nowhere, were luminarias, candles (real) in brown paper bags, going on forever. As an adult I guessed it was probably ranchers, lining their driveways - their very, very long driveways. At the time, in my young child mind, it seemed like the bright stars had settled on the ground as well as in the sky. It was magical and I've never lost my fondness for luminarias and the magic of starlight in a bag.
Before tripping the land lights fantastic, the Culebra sky had put on a light show of its own. 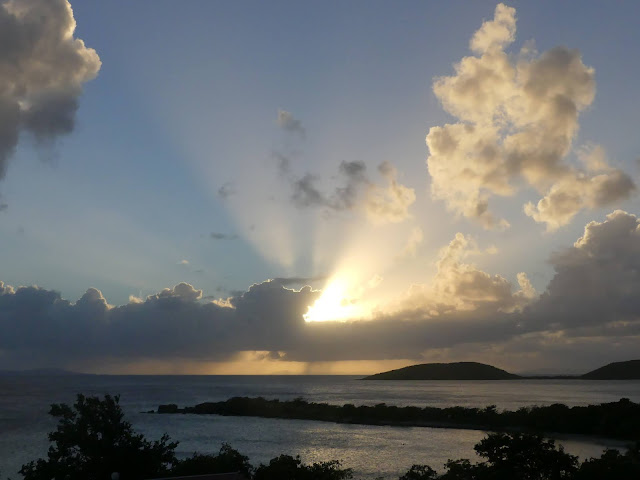 We've been having some incredible sunsets lately.
This promised to be another. 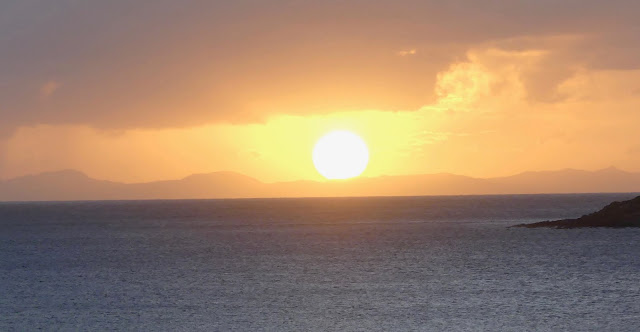 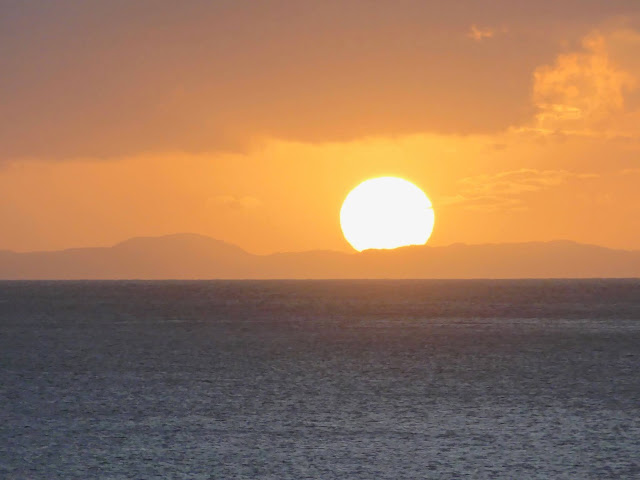 The sunset the night before was glorious, but there was a cloud bank over the mountains, which pretty much was a promise of no green flash. 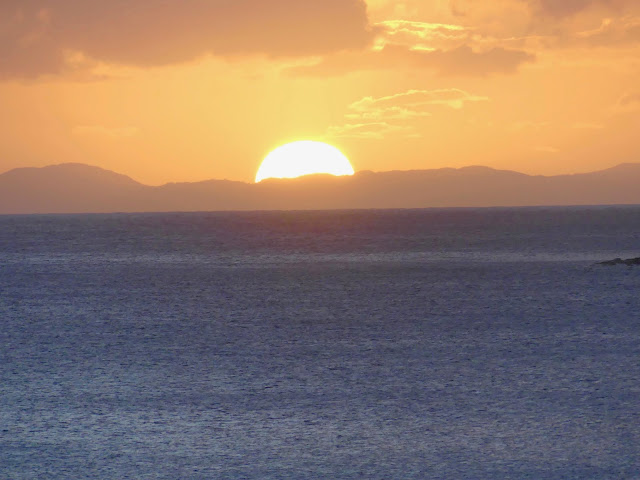 The clarity as we were spinning out of the sun's light looked promising.
A green flash to close out the year?? 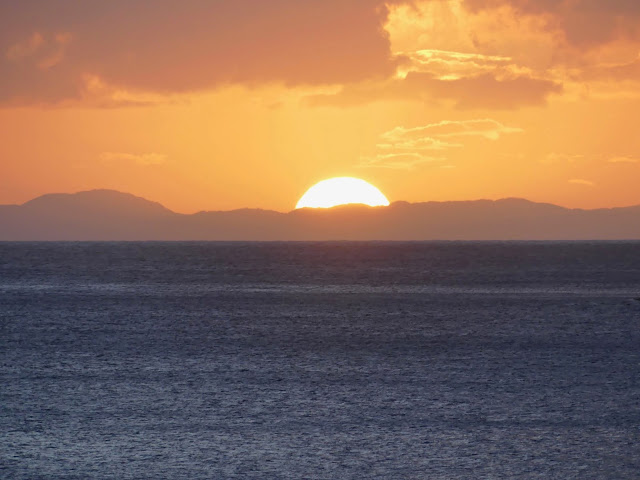 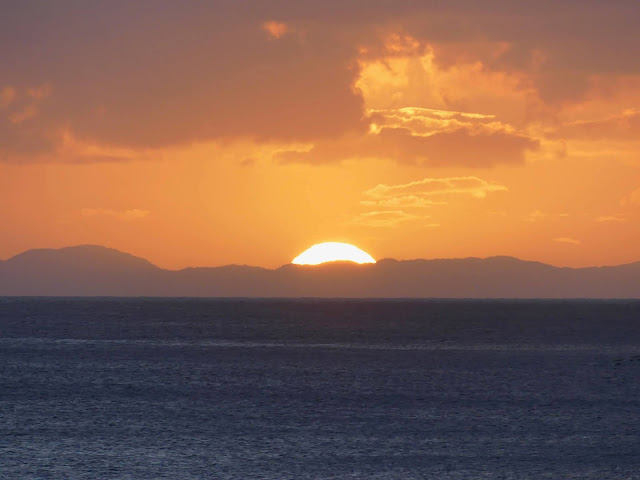 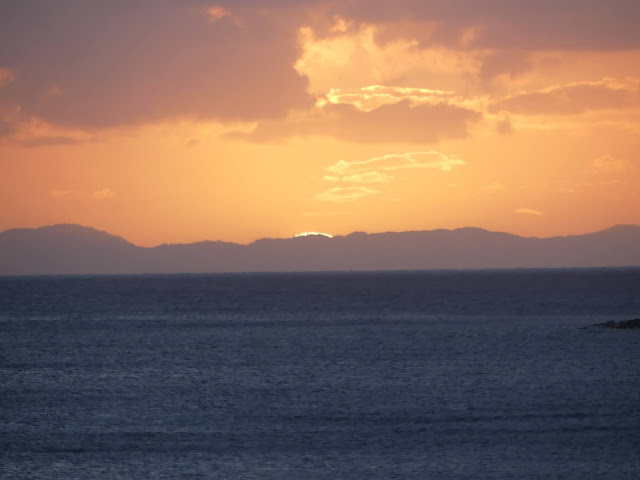 Would it happen? Was it happening? 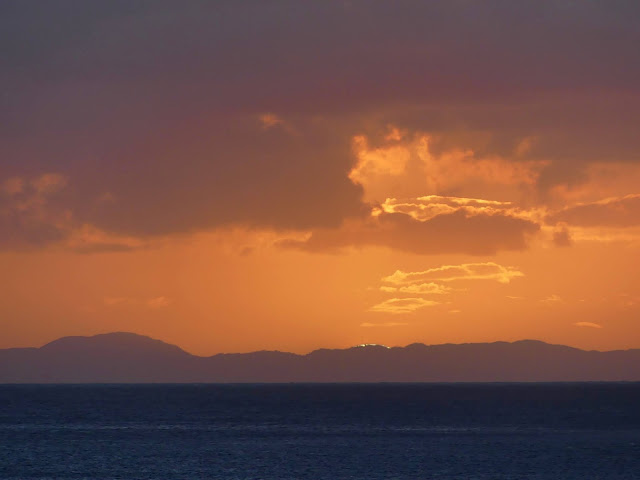 Yes!!
If you look closely at the left bit of the sun, you can see the start of green.
The flash happened a millisecond after, way too fast to click on (unless I'd been smart enough to have it on burst mode, and I was not), which is how these things go, sometimes a flash lasting a second or more, bright as a faraway firework and sometimes, a blink of an eye. 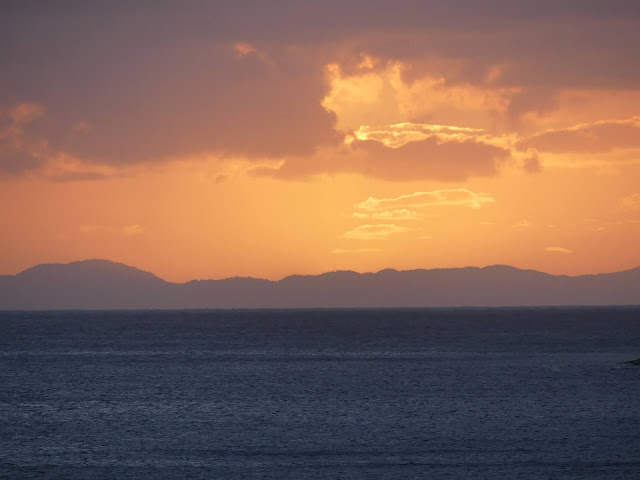 Land and sky, keeping to the light in the obvious analogy of a year with plenty of darkness, isn't a bad way to look ahead. Let's remind ourselves and each other in this new year.

Have a 1st Friday full of the fanciful and fantastical. Do something fondly. 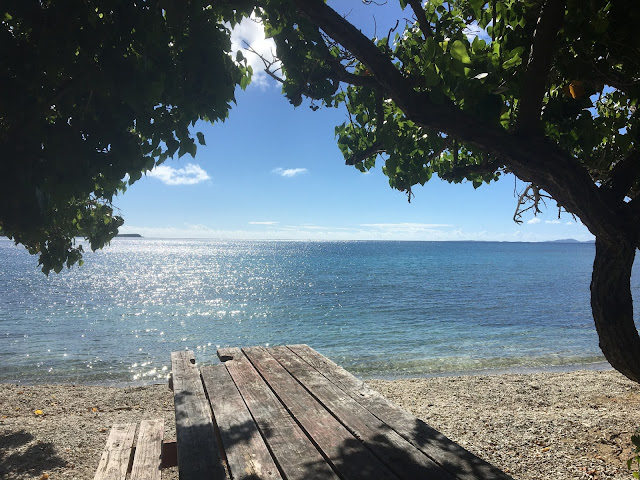 Email ThisBlogThis!Share to TwitterShare to FacebookShare to Pinterest
Labels: No beach Culebra Sunday

I know rainy days aren't for everyone, but even when I was working every day I welcomed an all day of coolness; the rain, the grey skies. Because it doesn't happen very often around here, maybe it's the differentness of it. 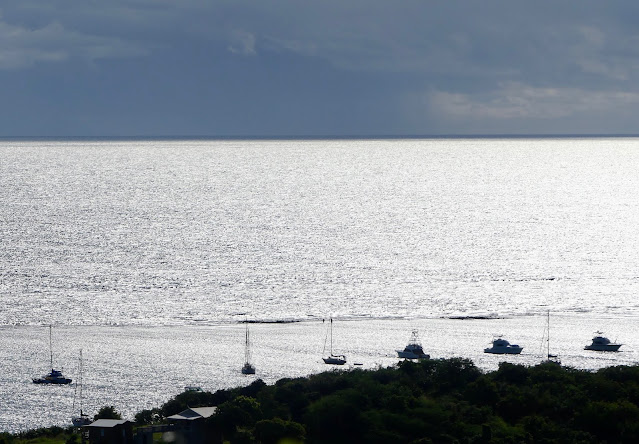 After, when the sun is out and the skies, especially in winter, are an indescribably clear tone of blue (though we've all tried to describe it), it never fails to amaze me how quickly the muddy roads, the splashy puddles, the diamond beads on leaves and grass are gone, poof! Plants grow extra fast with the magic water of rain, it's almost observable - the greening of the island, the buds turning to blossoms. A transformation, a show of Nature, all for free. 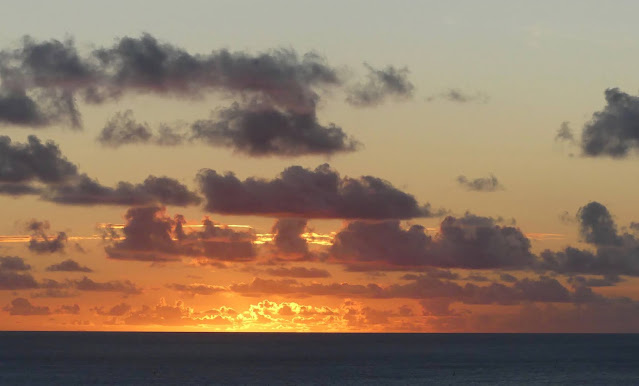 This morning's dawning and sunrise gave another show. I paid my ticket in early rising, dogs doing their yips of get up! It's walking time! and the grand running just because they could. I didn't run, but a walk to start the day is a very good thing, even without coffee first. I need to work on that plan. 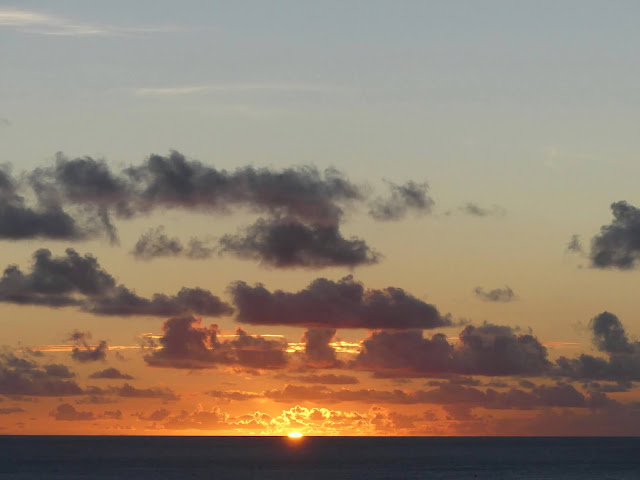 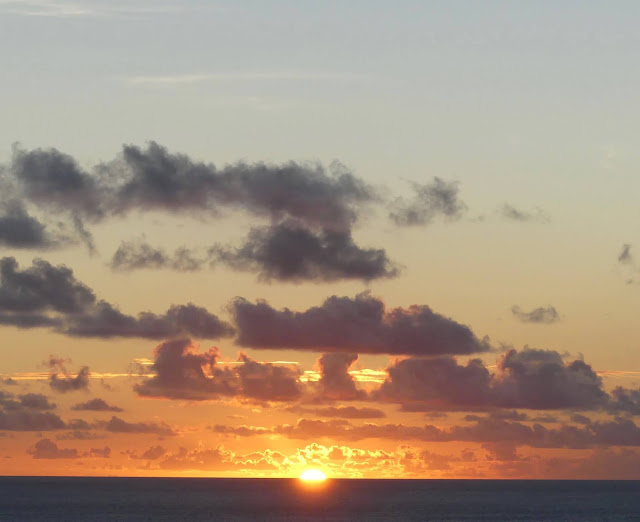 Have a tantalizing Tuesday. Do something thrilling.