Today we took a little drive right around the corner from my friend Robin's house to the Fred Gannon Rocky Bayou State Park, to take in some nature trails. I started wondering, who was Fred Gannon and found some history not unlike ours on Culebra. This area was also used as a bomb testing site, at least until it began to be developed. I'm sure there's more to that story; Eglin Air Force base is very close by but there are no more bombing runs.

It's hard to find out a whole lot about Fred Gannon, not even a photo in my search, but he at least got the park named after him, to recognize his part in the park's creation.

"In the late 1950s, Colonel Fred Gannon, Director of Civil Engineering at Eglin Air Force Base, proposed to convert the range into a public area. The Engineering group began the initial construction of the park under his direction following his proposed designs for the proposed park. In 1966, shortly after completion of the road and trail work, the lands were purchased by the state and became part of the Florida State Park system."

Maybe we need Culebra to become a designated national park...

There are 3 trails in the park, short and looping back to the main parking area. We walked all of them and only ran across a few people along the way - surprising for a weekend, but good for us!


One path was along the bayou. At one point we could see the bridge we'd come over, the one right by Robin's. How good to be able to walk away from civilization with only a very short drive.


The magnolias had already bloomed up here but their glossy leaves stood out in the various oaks (including a Turkey Oak, which I'd never heard of before) and pines like a wild orchid in a desert. But there was more.

There is a good restoration going on here, with an artificial lake that was dammed being drained and the small tributaries from the bayou being allowed to once again create their own waterways through the park. The lily pond is one result.


We usually try to get in one nature walk when I'm here and this one worked for me. Next time we're thinking Ponce de Leon park. Maybe it works!

Have a sensorily sensual Sunday. Do something sensitively.

It's been a good time in Central Florida with Francie and seeing Sue. Yesterday was a 'see Sue' day, another shot at the Shamrock restaurant (it was good again), a drive to the end of Trail's End and pure entertainment in Sue's backyard. Wild Kingdom indeed. Like the ocean, never the same. Again.

But first, another Lake Panasoffkee moment. Because it's here.

There are usually ibis to see here, to the point of them being somewhat of a common nuisance in yards and the streets. But it's impossible for me to see them like that, their determined pecking nature, their curved slender beaks brightly or dully colored orange. A bit of exotica to me.


And then, with seeing the bird below, the guessing began. I said some kind of ibis something something combo. Francie said ibis. Maybe. So of course I went to the fount of all knowledge, facebook, posting a phot and hoping to find Teresa or Nadine for information. Teresa responded first. We texted back and forth images, nothing quite right, until Teresa stumbled upon a bird poster and there he was. The Limpken! So called because of his awkward, limping like gait. And he really is sort of a combo, in the ibis and rail families. Mystery solved. If you want to know more, go here.

Ok, back to yesterday, because that was yesterday, and yesterday's gone. Sorry. There is a song about EVERYTHING.

Before we got to Sue's we went first down a road untraveled, called Trail's End. Sue had told us that it was one of those 'biggest some kind of tree' places. She actually named the tree but I forget. Anyway, those things are rare, so we went to see it. Spoiler alert, we didn't see it, apparently it's a fall thing when the summer jungle growth dies back.

Back at Sue's, it had started pouring. It's been like that, intense lightning and thunder lashing rain storms, which I love (as long as I'm not outside under a tree standing in water) and then out comes the sun. But in between are cloud covered, not raining but still cool moments. They don't last long, sort of like rainbows and just as welcome.

As we sat solving the world's problems, Sue saw these two, tearing it up in the backyard. Another of my favorite birds and not seen often by me (they don't grow on Culebra), I crept outside with camera in hand. The rain was almost done, the spigot turned to a mere soft drizzle before ending completely.

Eventually the pair flew off, but the three of us stayed by the water, seeing what we could see with Sue telling us stories of happy hours past. And then along came this little fellow. I know he looks big in the photos, Francie says he was only three feet, I say four so I'll settle on 3 1/2.

He was swimming fairly quickly along until he spotted us and came to a complete stop. We all agreed we could take him, if need be. That's a joke, animal people.


We hoped for an owl sighting, one of two Sue says is a regular visitor, but it was not to be. Next time!!

I have so many unposted photos from Culebra, but with fast Wifi, it's time to Be Here Now! So I will.

Yesterday we went to Floral City to see Sue. As many years as I've heard about this place, I'd never been and it was a really beautiful surprise. Trees and lakes and rivers, wide expanses of green fields, a cute restaurant with really good burgers and being with friends. Combined, it made for quickly passing hours of happiness.


The Shamrock is the place to go in Floral City if you want a great burger and fries, a totally different experience from El Batey or the Tiki Grill but food wise? Close indeed. I should have taken a photo but sometimes you just don't and I didn't. They have three warnings on their menu and one of them was this: BE AWARE OF RAW OR UNDER-COOKED FOOD
I wasn't real sure what that would mean, or the other one that said they weren't responsible for over-cooked food, so I ordered my burger and said rare, fully prepared to accept whatever happened, even though the server said "I'll just tell the cook Moo". Since my Dad always called our choice in beef prep 'Flip flop moo' I took that as a good sign. And it was! A good rare burger smothered in mushrooms and real Swiss cheese. Francie and Sue got their medium rare's done perfectly too, so yay Shamrock!

There is a place nearby called Duval Island. It's not an island as we think of an island, but due to the many lakes, rivers and tributaries, it is surrounded by water, which is all that is required for the designation. One huge property owner is Ferris Farms, who grow citrus but are now known for their berries. You can go blueberry picking here! We didn't but you can. I can't quite remember if they are actually ON Duval Island, but there is a property there that looks like it would be theirs. Because they have a zebra!! Two donkeys and one big BIG bull were out when we were there, with horses across the street. It was definitely get out of the car time.


We drove down to the end of the island, to a collection of cottages called Sunshine Lodge (apparently the same owner has the Moonrise Resort also but we didn't go there). If you ever want to take a holiday to the 'other' Florida, this would be one place to do it. Little cottages, a huge lake for kayaking, fishing etc. or just lazy gazing, it pretty well defines bucolic. No photos, again paying to much attention to the experience to recreate the experience. That's not a bad thing for me. Sometimes.

I'd been saying I wanted to get a photo of a sandhill crane - one of my favorite birds - for quite awhile, but every time we'd see some, it was not a good stopping place. As we were leaving Duval Island, this one was in a yard on a quiet street, so we stopped. Then I felt terrible; maybe it was hit by a car, or who knows, but its leg was definitely injured as it moved away from me and my camera. I jumped back in the car and let it be in peace. Waaah.


Out of the order of how things went, but another bird of note. Probably the biggest cardinal I've ever seen, he was sitting pretty on a barb wire fence draped with Spanish moss, posing this way and that. He waited until I'd gotten all of his best sides before flying off. 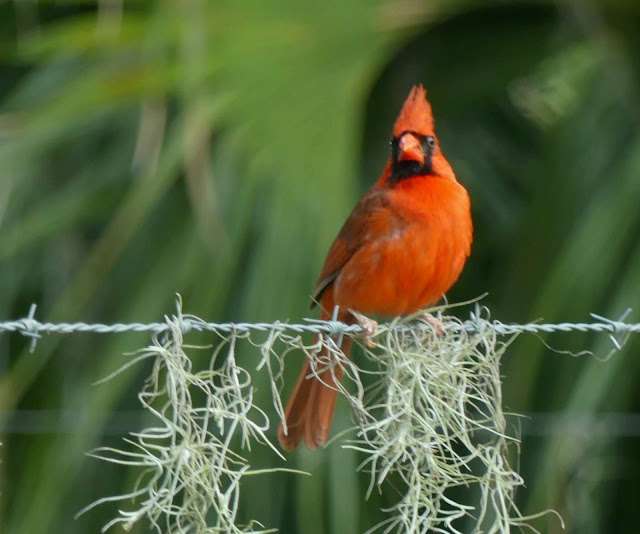 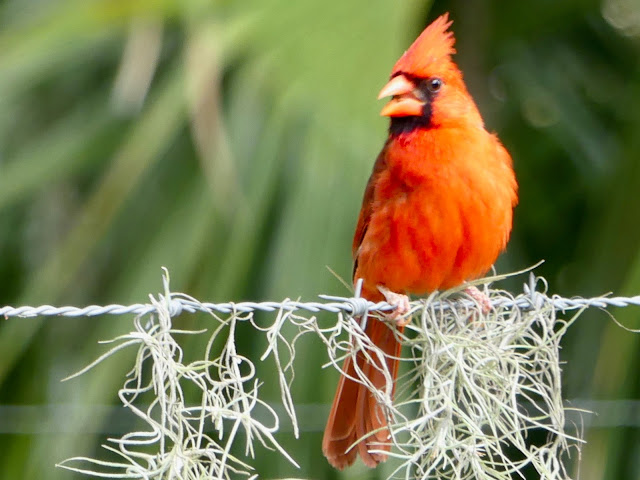 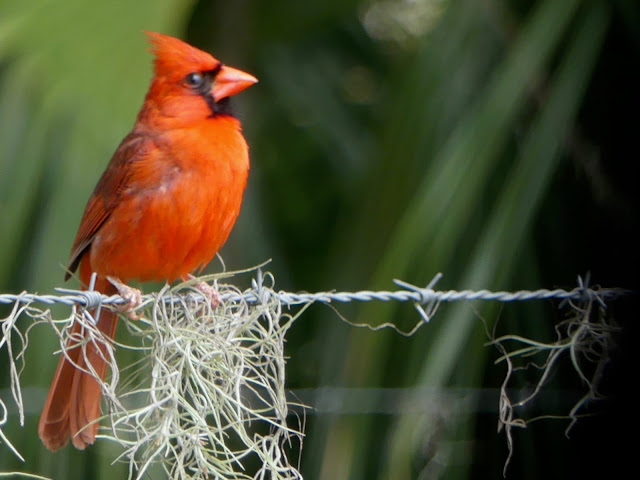 Back at Sue's, we rounded up the good day with plans to meet again before I head out. That works.

Have a satisfyingly saturated Sunday. Do something sublime.