A Lot of Flora and a Little Fauna

One of the fun parts of house/pet sitting is getting to see different views than my own, even if my own is ever changing. Whether or not it is a place I've been before there is still a captivating differentness in the sameness. Then again, I'm easily entertained. But I've already mentioned that. More than twice.

Last time I was here there were a lot of pelicans, flying, feeding, diving. This time, nary a one. I think that's a seasonal thing. I hope. I did see some kind of raptor, quite small with gold edged wings, but it was gone long before I could have gotten a photo. I'll never know what it was except to wonder over the memory, in a golden frame.


Last night was another one of those where sleep was elusive. No, I didn't go wrestle with an eel. But I did go outside and look at the moon.


It was lightly raining when I woke up this morning (meaning I must have gone to sleep eventually; leave it to a boring book to do what it is intended for). Misty and grey and eventually, the sun came around. Sort of. The day is still deciding what it wants to be when it grows up, as the breeze blows strongly, I can hear thunder somewhere but the sun is (I actually had to go outside and look all around to see if I could see the sun; I can't find it) out there in the wispy clouds hanging in a baby blue sky. Weird.


I really like tanbark sails. There's just something about them on a classically built boat that completes it. Way out in the misty morning there was a vision gift.


Because I wanted to see if tanbark was one or two words, I looked it up. Wow! There is quite a bit of heated discussion on various forums about these sails, who knew? Well, probably lots of people know, but I didn't. From their history of canvas being dipped in water colored with bark tannins to the modern day dying methods on contemporary sail materials, it seems to me to end up being a matter of taste and money. But you can decide for yourselves. I just like the look and yes, it is one word.

Have a free from fear Friday. Do something fervently for the future.

In the Middle of the Night

Last night I did something I rarely do. I got up in the middle of the night to make a meal. To do that meant getting the flashlight and going down the long path through the mangroves to get to the porch to get to the fridge to get to the food that I wanted to eat. Like that. Because I'm not together enough yet to have my cooler thing going on. And that's okay. 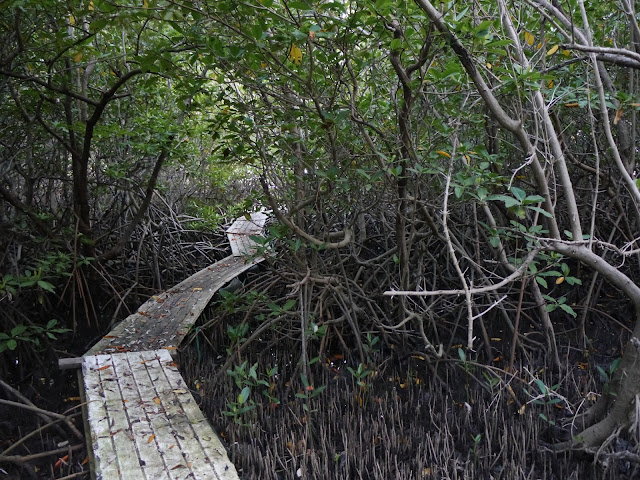 Outside on the deck, I realized the tide was still full moon high. So high that I only felt safe sitting down on the deck and slipping onto the dock. The boards of the path were almost even with the water but my feet weren't getting wet. The flashlight with its bright LED lights kept me where I needed to be, and I could also see into the water. There, what was that? Inches from my foot. That movement, that...puffer fish, swimming in a tight circle, in bare inches of water? The brain doesn't compute these things sometimes. 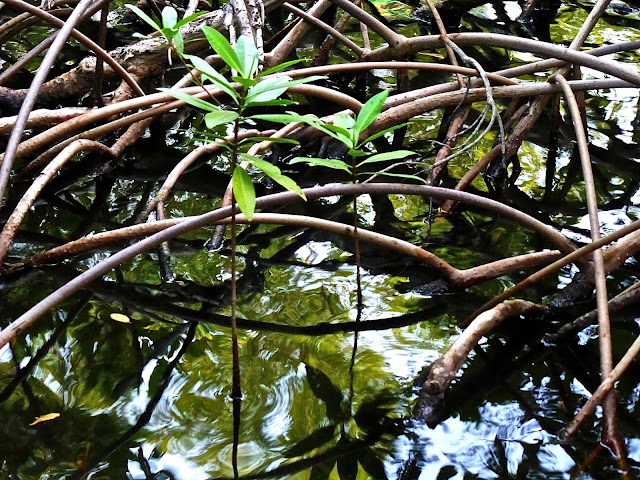 Until I saw the moray eel, mouth wide open and closing in. The puffer wasn't swimming, he was being swirled in the eddy of the moray, who apparently also was feeling a bit peckish for a midnight snack.


The light disturbed them, breaking up the dance. Zooming away in different directions it was suddenly still again and I made my way to where I was originally going to do what I originally set out to do. But my mind was far from practicals, it was caught up in the sort of swampy ethereal world we live in, where things are going on all of the time while we sleep or dream or work or play, things we have no idea about. Moments uncaptured by pixels, this one left to roam around in my brain as a solitary night wonder. 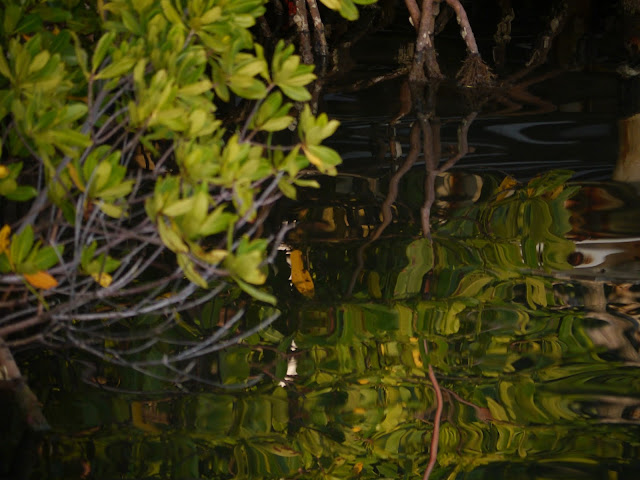 In the middle of the night. 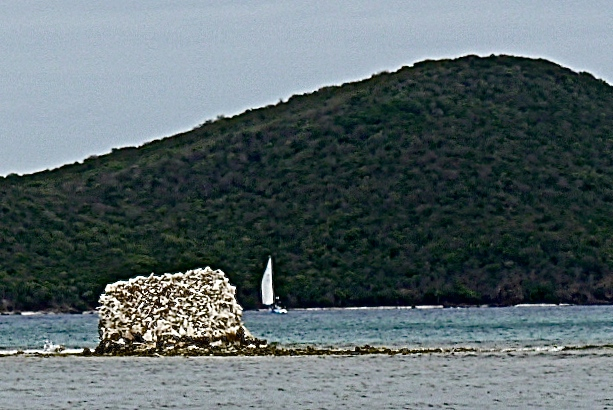 Tickling brain cells
What is isn't - or is it?
Mystery intrigues

You Know What to Do

I think I live in an amazingly beautiful place in the world. I know a lot of you think the same about your own home place. If we all did our part, even on the smallest scale, all these places would be better. Really. 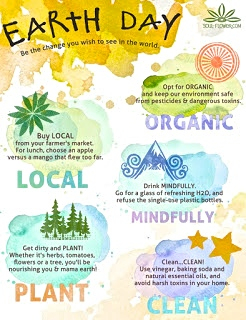 How Amazing is That?

When getting together with friends who have lived on islands a long time (or their whole lives), it is almost inevitable that talk of change is going to be part of the conversation. Usually it is changes from the perspective of loss. Loss of land, loss of simpler pleasures, loss of environmental purity due to greedily done rather than carefully done development. But sometimes the positive changes come to the surface (even if one begets another).

Water, electricity and say, vegetables. While we still don't have the staggering choices of the foods halls of the world, we've come a long way from the days of the Wednesday veggie truck; when the sight of cauliflower was nonexistent and green beans were a rare event (though I admit, the sight of green beans almost always has me reaching for my wallet).

I know I've mentioned this before but it's a big deal than one big addition to our veggie selection is D's Garden. Who thought the day would come when we'd see anything close to this in our emails? Go Diane and yay for us!


Life is always about change. Some are to be celebrated. Some are to be fought against. Some can just be ignored. As long as each is done with passion and as good manners as can be mustered up, change itself doesn't have to be a dizzying prospect. Easy for me to write. Not always easy to do. In case you hadn't noticed...

The following photos are from D's Garden facebook page. I figure it's better to see it from the creator's eyes (in other words, steal the photos first and ask permission and forgiveness later). There are lots more photos on her page but this will give you an idea of what is waiting for you. From selection to presentation, she's got it going on and it will just continue to get better. 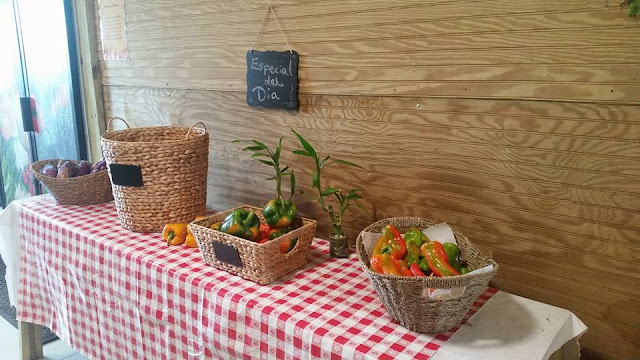 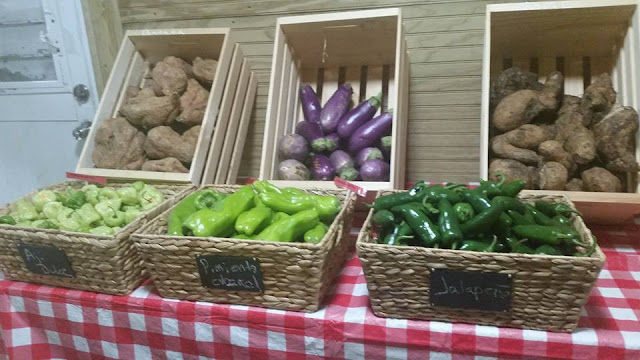 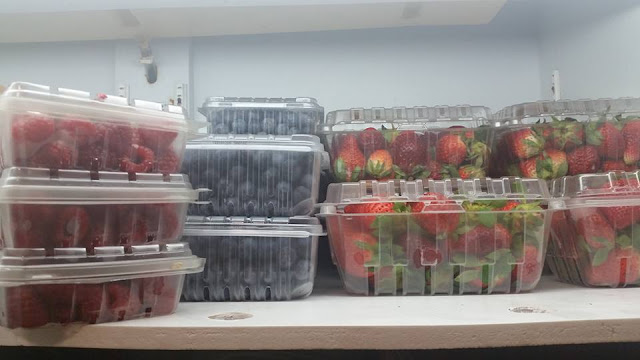 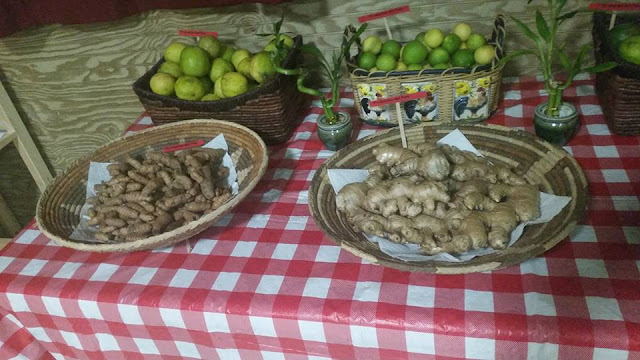 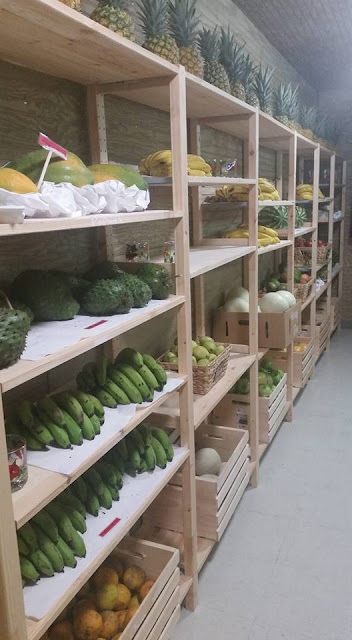 Of course there is always the idea of growing your own. A good thing, playing in the dirt. But if you can't or won't, good changes on our food scene are getting better all of the time. Buen provecho!

Have a toss on the thinking cap Thursday. Do something tenderly.

Randomness on Culebra and Beyond

Randomness because often that is how life happens. Even with a plan, a goal and a dream. The trick is accepting that; those happenstance meetings, this blocking to something or other you are trying to do/get to/make happen. For me, that will still be an ongoing lesson until the day I drop off this plane. I hope there is a second of the usual 'OH! Now I get it. Again.' 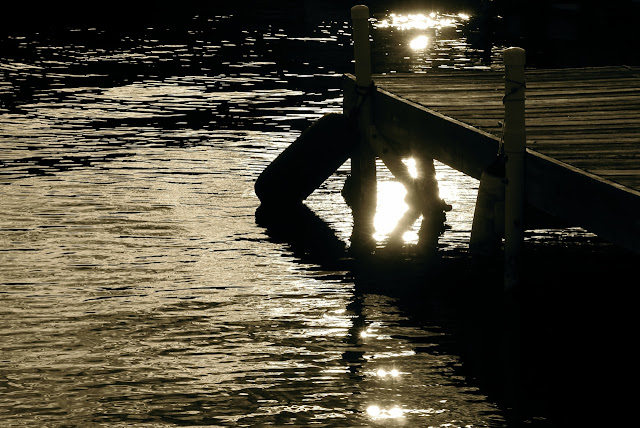 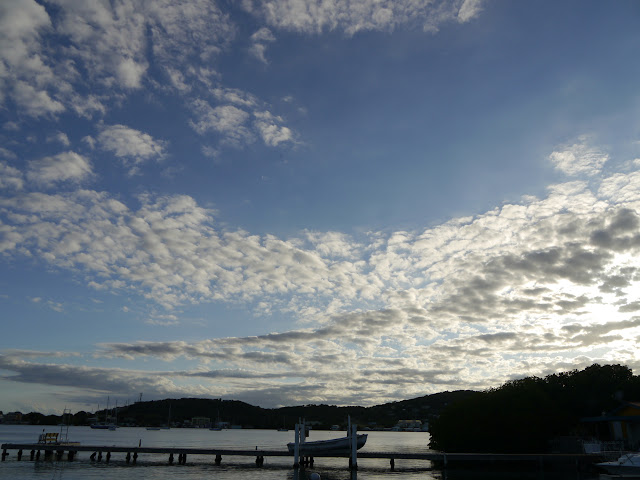 Last week, when the water was glass, a trip was taken to the big island for the purpose of sending one of our loved-while-fostered dogs. He was met by folks who have a home on Culebra and know him well, who helped get him onto the next phase of his journey to his forever home. 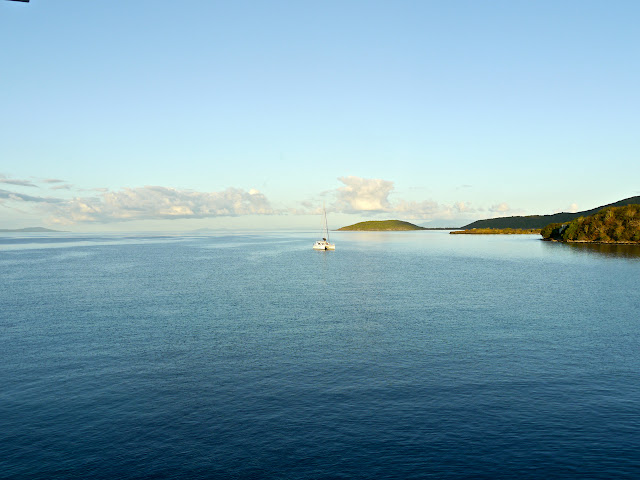 Still again except for when it isn't. The expected deluge of rainy days failed to show up here but it was really breezy yesterday afternoon, a feel good change after hot stillness. Feel good versus the visual beauty of still water and crazy clear skies...

Email ThisBlogThis!Share to TwitterShare to FacebookShare to Pinterest
Labels: Culebra 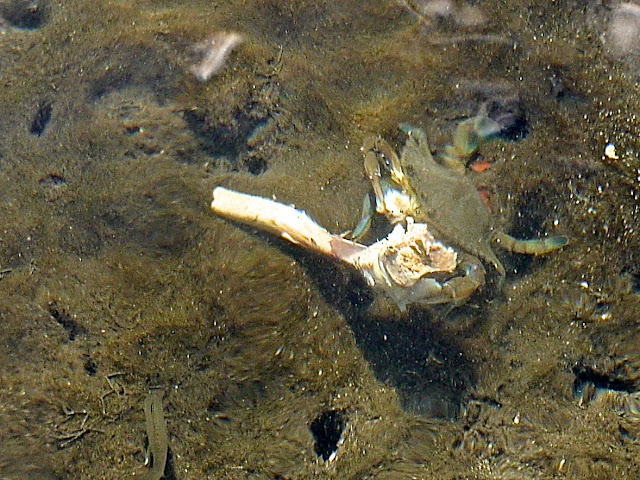 Yes, another bastardized song lyric theft. I don't know a lot of songs but I know enough that I can pretty well fit almost every situation I've ever come across to a line or two of a song permanently embedded in my brain pan, like it or not. Thankfully, most of the 80's are song brain dead to me, a line that will bring jeers from many of my younger friends who found a plethora of musical wonder in those years. Mea culpa! Sorta.

The stillness has continued. In the afternoon yesterday, there must have been something very tasty about 10 feet away from the front of the houseboat, because suddenly there were birds everywhere, crying out as they dove and dipped and rose again. There were frigates and terns and laughing gulls and one I'm not sure what it was except fast and aggressive. 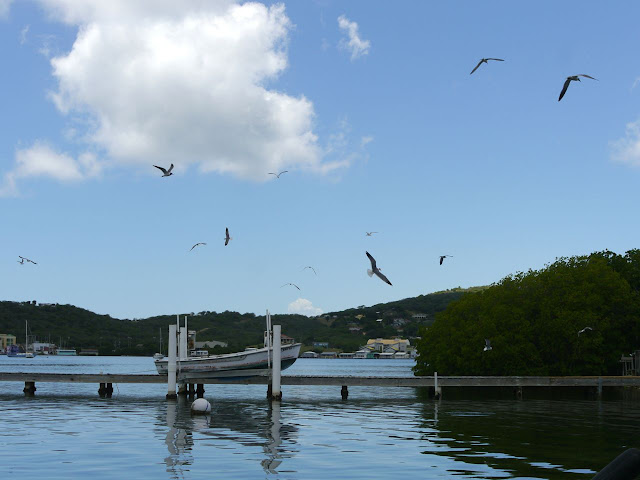 It should have, but didn't feel Hitchcockian at all. Maybe it was the brightness of the sky, but all I felt was wonder wrapped in raptness . 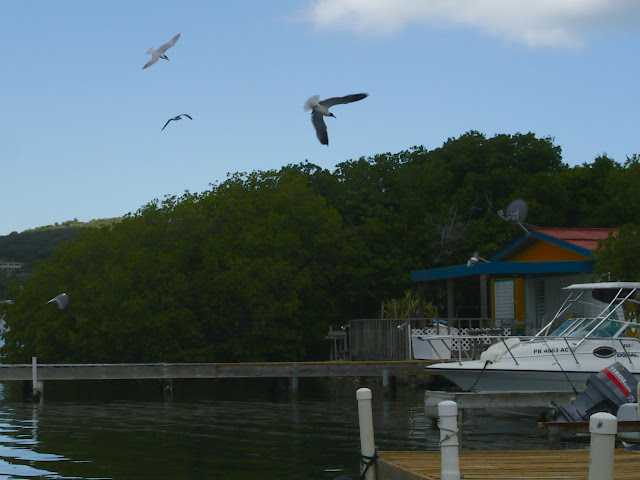 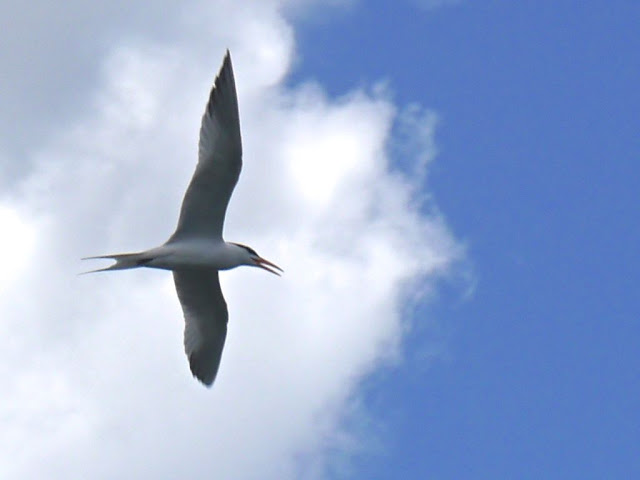 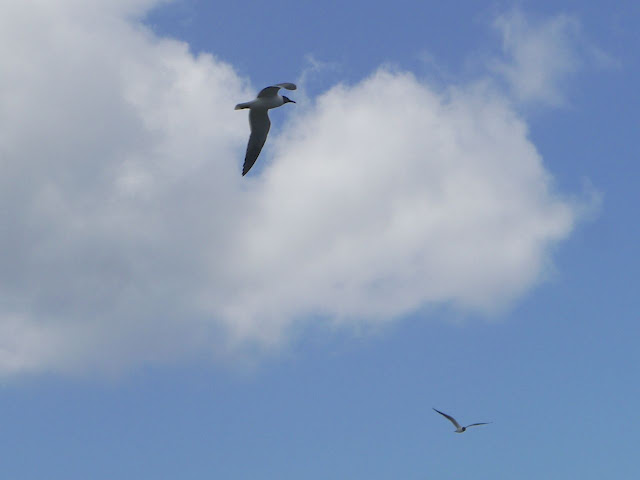 This morning, in the absence of watching my curtains blowing, I was grinning before even sitting up to look out the window. What would be out there? 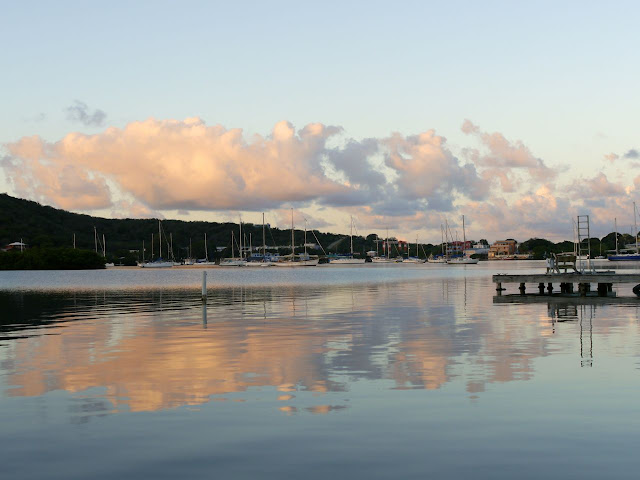 In the time it took to get the camera (which, on the houseboat, means going about four feet one way and then four feet back) the pink and orange had already started to lighten up. By the time the water was almost at a boil, it was gone completely. No matter, glory was still to be found. 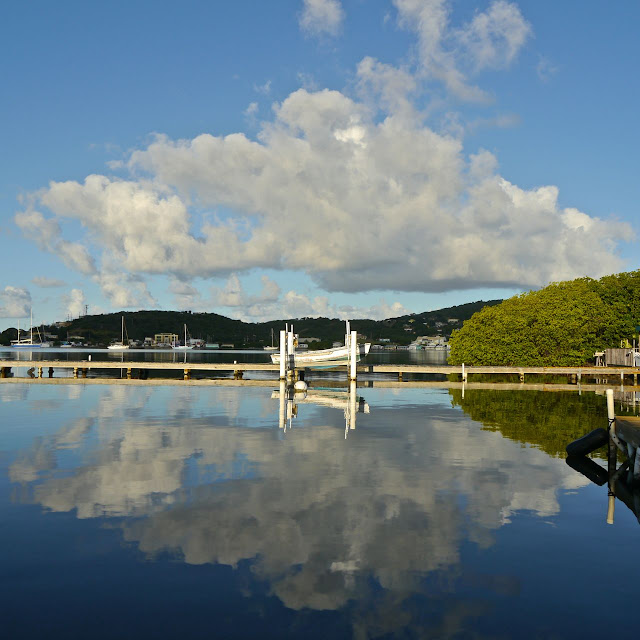 This isn't out my front or back door, but it's close to the neighborhood.

The air today is very different. For one thing, it's still. Well, it was still, early on, when I was drawn to the window by the sound and smell of a boat engine and lots of male bantering. Loud male bantering. That's okay, there are worse alarms.

The ripple is only because of their low wake. It never quite subsided but good enough. 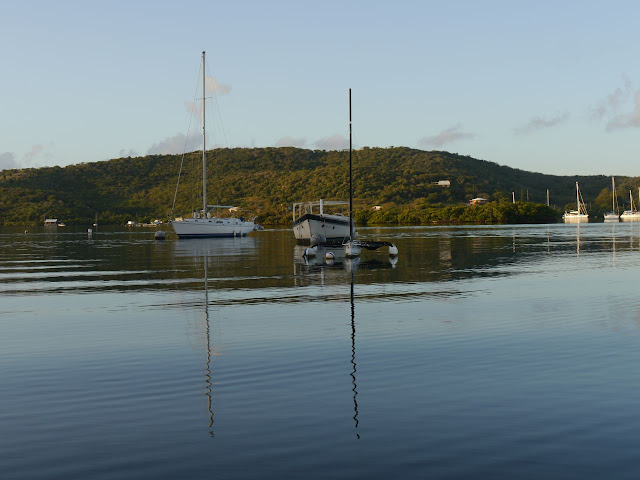 Tea made, emails checked, a couple of crosswords to the good but I kept being drawn to the view. Then a voice called out my name, telling me there was a frigate on a mast. Maybe you've seen a hundred frigates on a hundred masts but I've never seen even one.

And he stayed. And stayed. He might still be there but I have to leave the boat to write these things. Even when I came out onto the foreward deck, there he was. Preening. 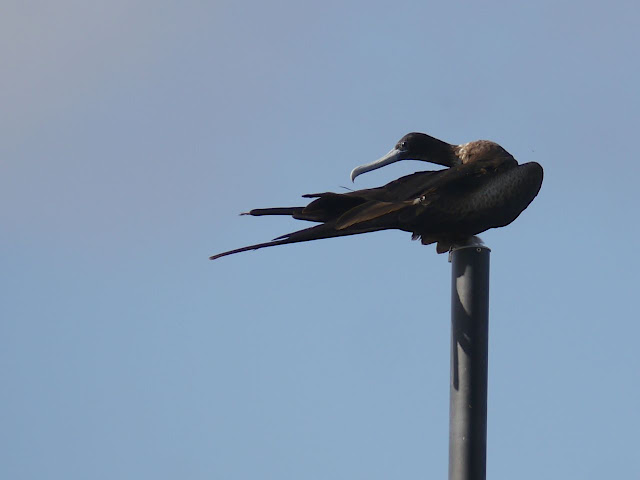 It was sort of like watching a Great Dane trying to crawl into a human's lap. 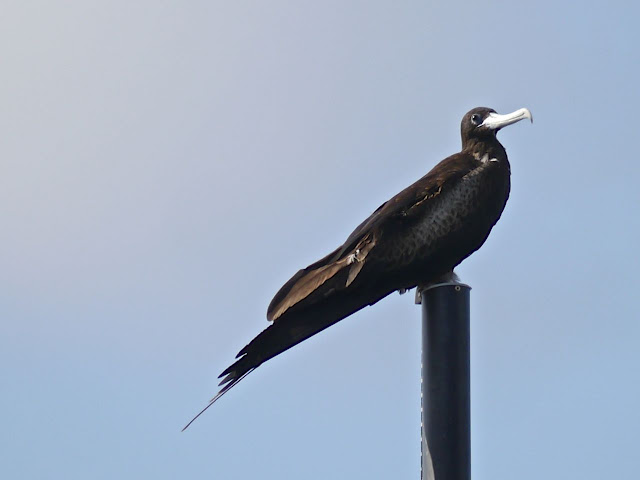 Without any white on him that I could see, we were betting he was a youngster. Who thought he was a seagull. Or an osprey.

Have a wonder what! Wednesday. Do something wryly.

p.s. political statement for the day