...and I don't think much explanation is needed other than the fact that I like graveyards. A lot, in fact. As does my daughter Sarah, so she took me to her neighborhood graveyard, the Lone Fir.

This is the oldest graveyard in Portland and rather big. So big in fact, that though she's been there a number of times, she's missed a couple of good ones...some we found today. I realized later that we both missed some really good ones, mentioned in this article. We've decided we'll call the number in the article and ask for a tour. They have a spooky one for Halloween, but I won't be here then.

For now...we liked these stones, some much more than others. We like the peacefulness, we liked the shoes and shirt lying by a tree...with nobody in them. It's a personal call, this liking of graveyards; you'll have to decide for yourselves. All photos can be clicked on to enlarge.


The trees are amazing here! 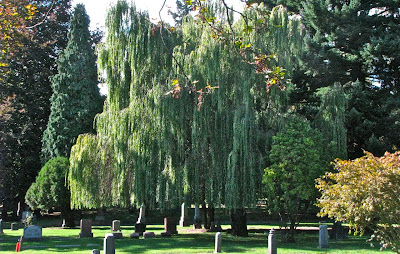 The following headstones are known as WOW headstones, for Woodmen of the World. That does not mean they were loggers, as I thought. For the unusual story behind these unusual headstones, click here. Whatever they are as an organization, they sure left behind some ornate and unique stones for their more affluent members. 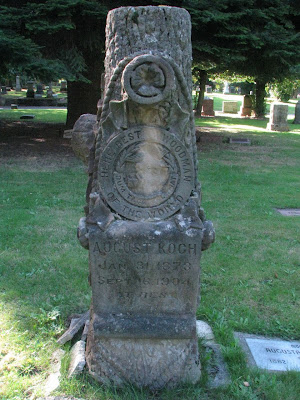 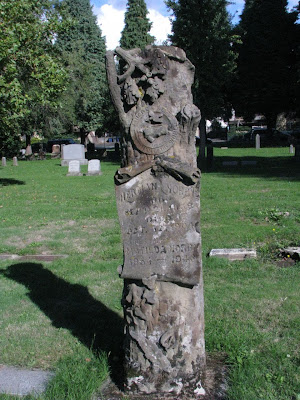 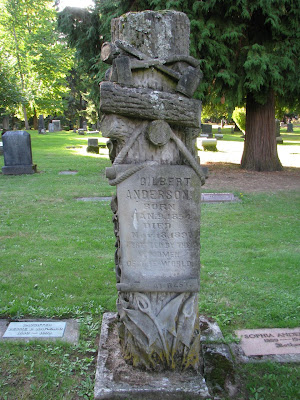 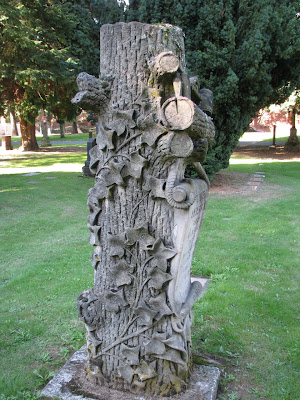 Sarah had told me about this but seeing it was lots better! 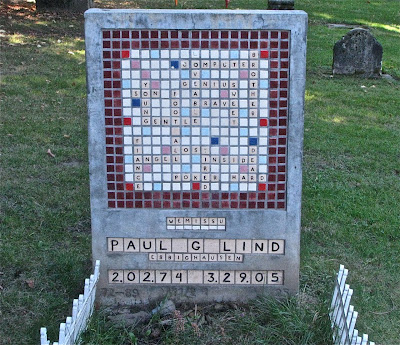 The hands are used a lot on gravestones here;
there is something very tender in these stone hands 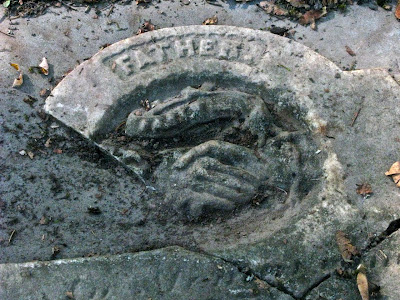 He looks so bemused and she looks very stern 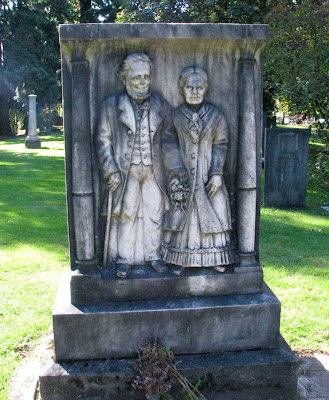 I love the inscription...I think I would have liked them too 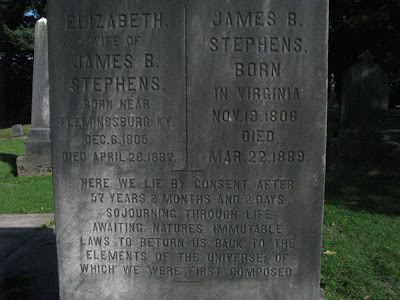 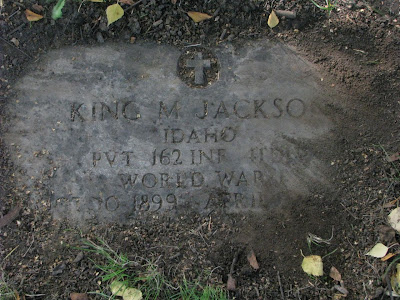 Sad story by the dates... 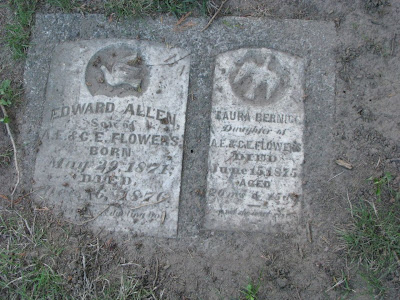 The Asian section is at the far end of the graveyard.The stones
are simple and beautiful, with this large, rather ornate exception 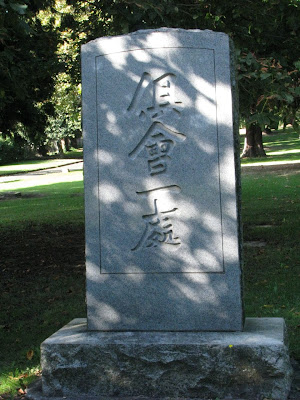 'We Loved Her' - what else matters? 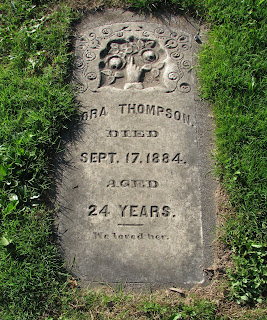 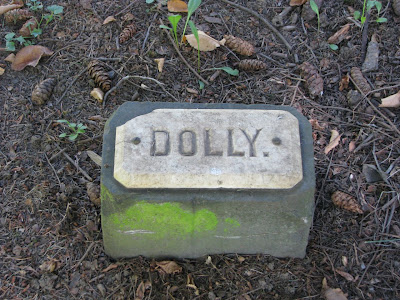 This is the headstone from the back...check out her facial expression. 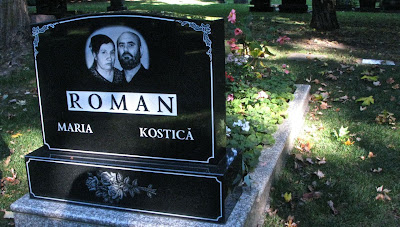 And from the front - newlyweds, maybe? 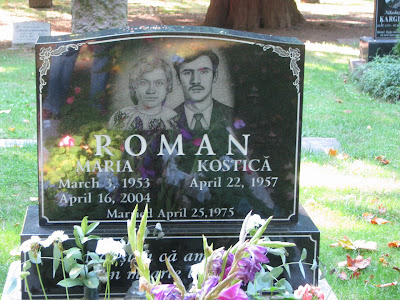 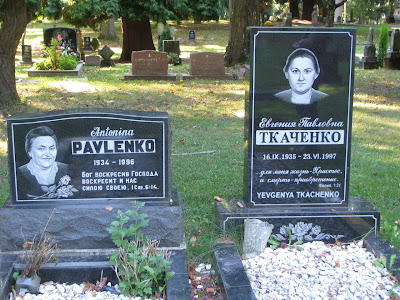 And then we went to Zuban's - a most unusual store combining gourmet
with pedestrian in almost random ways...well, until you get to the vinegar aisle 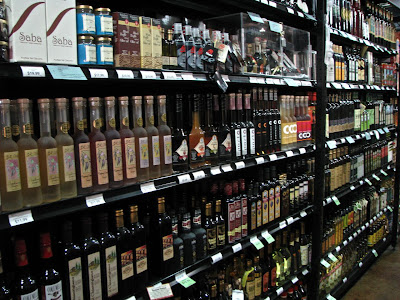 If anyone I know has a 200.00 bottle of vinegar around,
may I taste it please? I'd really like to know what the difference is. 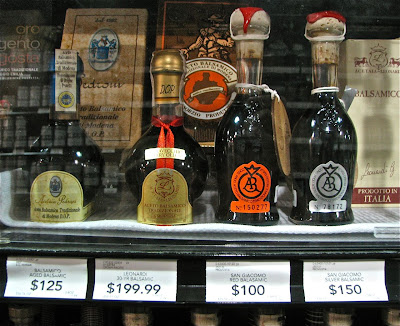 And I made zucchini cranberry muffins yesterday! They were a house hit and one I will definitely repeat at home, just not with Elijah's fabulous zucchini. But I'll call them Elijah's Zucchini Muffins anyway, because his produce inspired them. And just because Mom's are like that - sometimes. 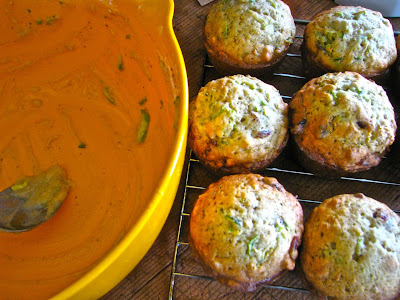 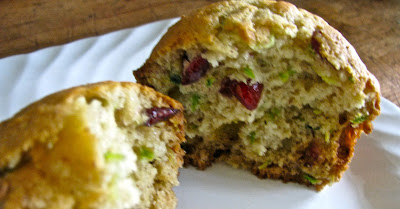 Photos of times and places


At this point, I have some really sweet photos of Sarah and Elijah but I'm afraid they'd cut off my fingers if I post them, so I can't. But...

The drive from Northern California to Portland was full of a lot of things...roads with twists and turns and more twists and turns, for one. I think I put a wee dent in the passenger side floorboard, but Elijah did an excellent job of driving and the only time I got a little freaked was when I thought we were going to run out of gas - which we didn't. When did my children get so smart?

Along the way we stopped at some friends of his who have a serene place in Grant's Pass, OR. Next door to them (outside of their fenced acres) lives a family of bears; apparently generational on the property for 50 years plus. Not pets, just...there. Supposedly they are well behaved bears...ok. We kept the dogs close by.

We got to their house, an unplanned stop, via the worst food I've ever tried to eat in my life - do NOT believe that all neat wooden signs advertising breweries mean a cool place. If you are ever hungry in Cave Junction, Oregon and see a sign for Wild River Brewing & Pizza Co., keep driving, there is hope up the road. Or in our case, there was Brit and John up the road, where we grilled fantastic locally made sausage, with squash and corn from Elijah's farm. Oh, we should have known when the bbq 'choice of meat' offerings included turkey or pastrami. Or when Elijah ordered his Black Angus burger on the rare side and she told us it was already cooked...yes, we should have walked then, but nooooooooooo. At the end, after a bite of our food choices each, when we declared - well, Elijah, much more politely than I would have, declared the food inedible, we were offered the choice of cash back or a gift certificate...just typing that makes me feel queasy...we took the money and ran. Were the dogs still in the car? What WAS that on those buns???

Lunch blurred the memory and then we were off to Eugene, to meet up with a musician friend of mine I haven't seen for 40 years. It was great to see Pete and meet his girlfriend Rosemary, who is editor for Northwest Travel and Oregon Coast magazines. Pete is still playing music and I felt 16 again for a few minutes there. I look forward to having more time with them next year...

Finally in Portland with Sarah. Seeing Sarah and Elijah together just gets my Mama heart melty, which disgusts them while they grin. Now Elijah has gone back to California and the kaleidoscope turns again. It's been a beautiful turning.

Sorry about no photos...Blogger is doing something tweaky to their photo upload bit and I can't seem to get anything where it should be. So photos next, hopefully.
Posted by Island Woman MJ at 9/26/2010 12:51:00 PM No comments:

Email ThisBlogThis!Share to TwitterShare to FacebookShare to Pinterest
Labels: Culebra to Portland

On the way and on his way

We are supposed to be in Oregon right now, but Elijah's dog Ragamuffin took a runner the night before and didn't get home until dusk last night. Since he's never done that before we weren't exactly still having high hopes, but then, there he was and very, very glad to be back. So as soon as the coffee is consumed along with a few odds and ends, we head up the coast. Right now it's foggy, but hopefully that will burn off.

Hopefully, in fact, it will be clear everywhere tonight for the Super Harvest Moon. For the first time in 20 years...well, read it yourself, in a much more NASA-like fashion, here. And please don't forget to dance in the moonlight if you can; you'll be glad you did.

And for all of those friends and family who have sent thoughts, goodies, and most importantly, love, to my brother Jonny, here is proof that he's been working hard to get out of that bed, back home and back to work! Congrats, brother mine! You're more than halfway there!
Day Two on the Job! 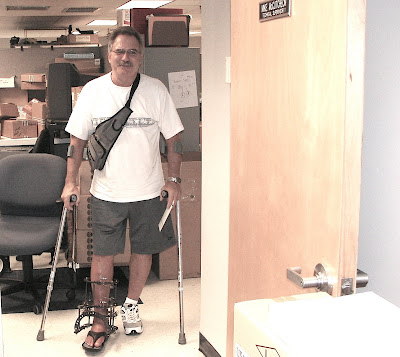 They really ARE big!

Yesterday we went down to Shelter Cove to the lighthouse and the rocks. There were seals all OVER the place!!! It was incredible and beautiful... 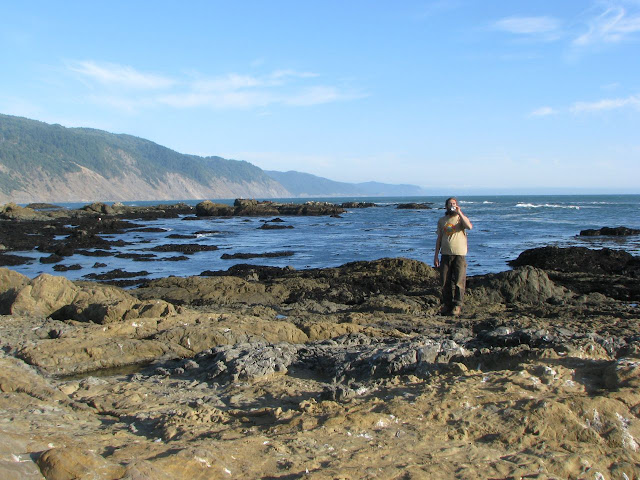 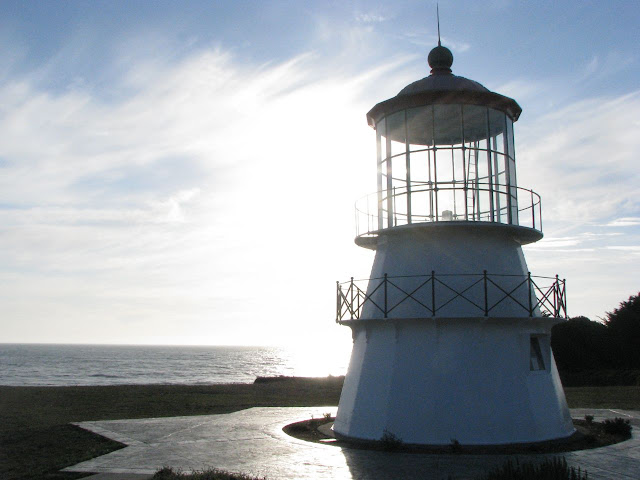 When we got close, the seals starting jumping in the water...well, waddling in 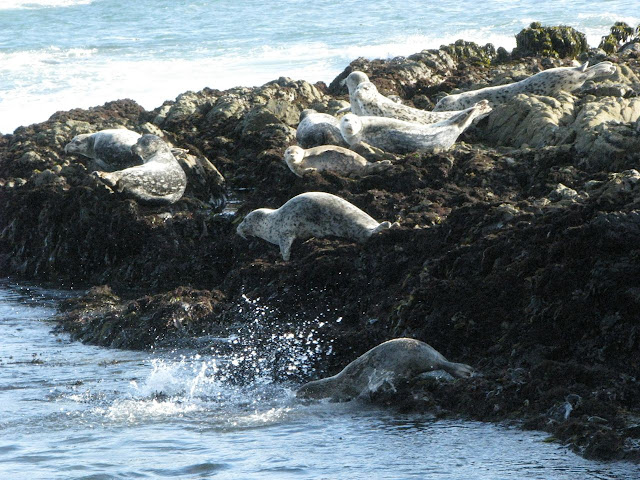 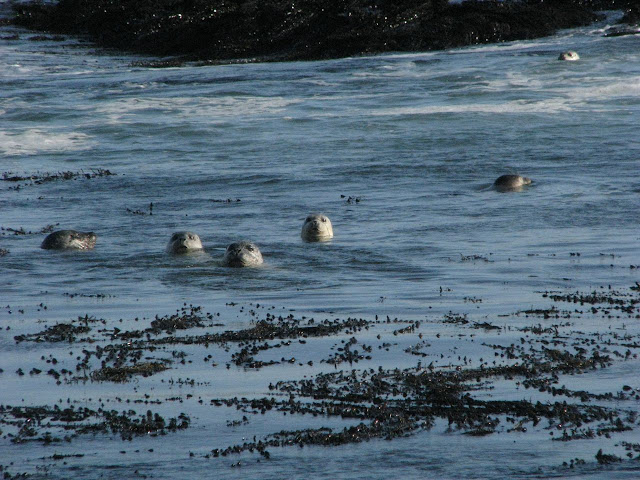 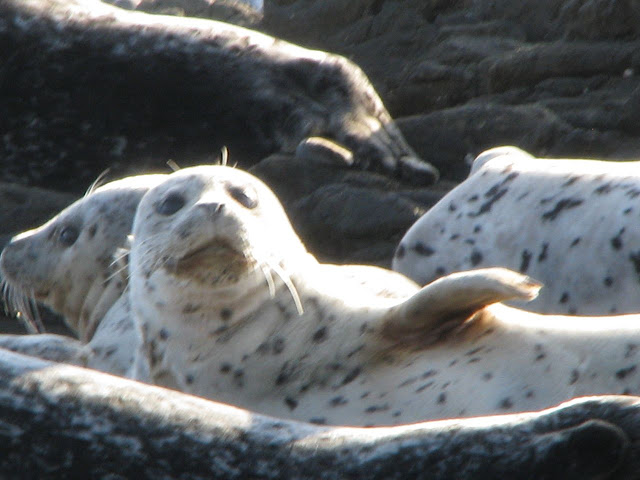 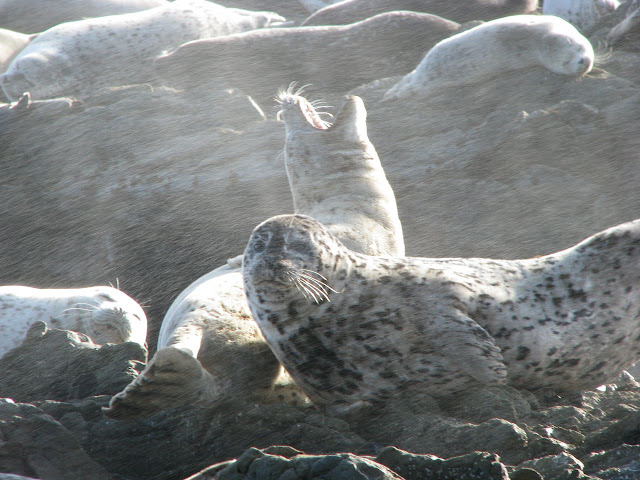 It was an amazing gift...one of those times you get to see nature at one of her shining points and share it with someone who feels just the same way. Thanks, Elijah!! Thanks, seals!
Posted by Island Woman MJ at 9/22/2010 01:42:00 PM No comments:

Email ThisBlogThis!Share to TwitterShare to FacebookShare to Pinterest
Labels: Seals at Shelter Cove 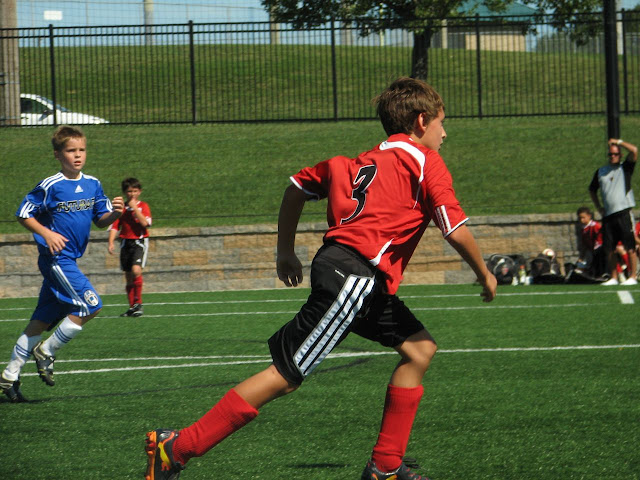 A sample letter to send 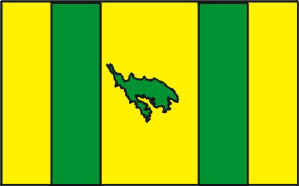 If you chose to send an e-mail re: Vila mi Terruno, here is the type of thing needed. Just send it to info@coralations.org

It's very simple just add your name & address to a short note.


I would like to be included on Coralations  motion for reconsideration to the Environmental  Quality Board regarding the recent approval of the Villa Mi Terruno environmental impact study.
Your Name ___________
Your Address _____________

This project will harm Culebra's delicate balance of nature & social development. The land will be scarred and the water environment will be negatively affected. Culebra's infrastructure cannot sustain a project of this size.  We still only have 1 garbage truck on this island. Our traffic situation in town cannot sustain any more vehicles from this project. Our  transportation services are already strained. I suffer when I imagine all of the construction and destruction that Villa Mi Terruno will cause.
Posted by Island Woman MJ at 9/20/2010 01:39:00 PM No comments:

This is long, but if you love Culebra, it's worth your time